of rough sleepers are men

of men have an underlying mental health condition

of NHS talking referrals are men

Join the WWW.NHAW.CO.UK campaign and encourage your local mosque to cover this topic in Jummah this week. We have prepared a Jummah Khutbah template which you/your imam can use. 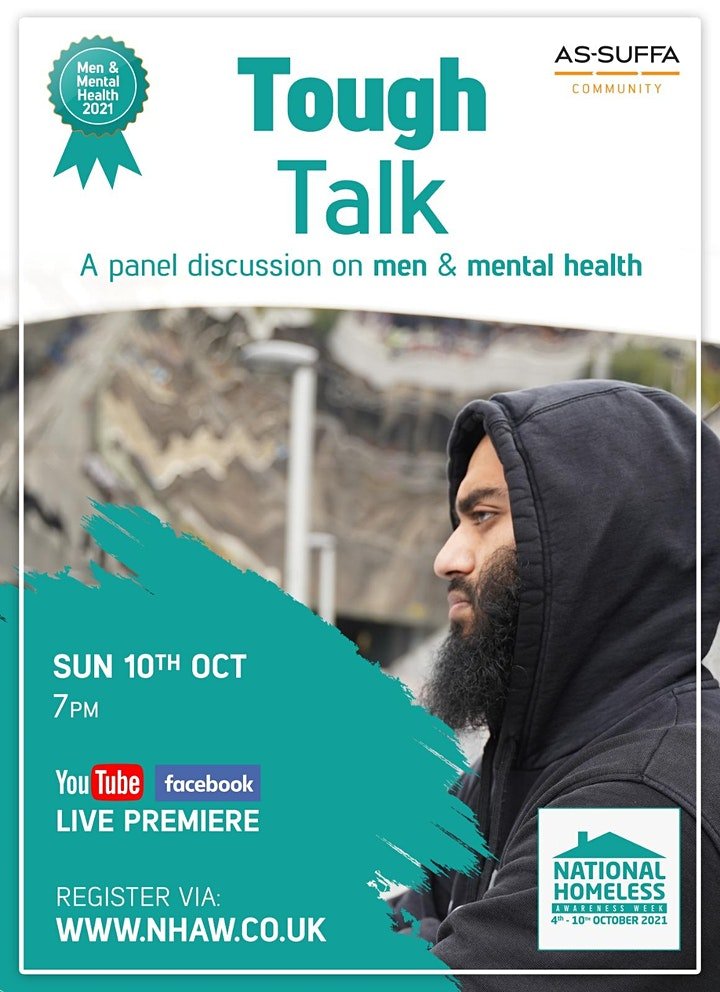 Relaxed informal discussion about men and mental health - from 7pm

Mental health amongst men is often regarded as a subject which is forbidden to discuss. Men are expected to be pillars of strength regardless of whatever they may be going through. The recent Covid pandemic has exacerbated mental health issues even more so due to enforced isolation and lessened interactions.

During the pandemic, the need to house the homeless was an issue that was targeted as a key area for improvement by the Government. There was a push to house the most needy, and those seeking shelter. However, this help is coming to an abrupt end, and homelessness is on the rise again. Once more, the affect this is having on the mental health of those without shelter is proving to be distressing. And this problem is affecting men at a disproportionate rate.

Sadly, many men do not know that there is help available. There is someone to talk to. There are different levels of assistance on offer. In this day and age, it should never be considered as a sign of weakness to acknowledge or to accept help, nor is it a display of a lack of masculinity. Everyone needs a helping hand once in a while, and it is never, and nor should it ever be considered as failing, when seeking help. In reality, it is being aware of how to become better when not well and a way to improve a faltering situation.

Although the conversation surrounding the status of men’s mental health conditions are being discussed increasingly, and there is more being done, it is still far from being enough. Many men are suffering, and suffering horrendously alone. Despite some progress in recent years, there are social pressures which unfortunately dictate how men behave, and how they should deal with the pressures of life. Men are still considered to be the ‘bread winners’, and are often told to ‘suck it up’ when they feel the burdens of life catching up with them. More often than not, many men need assistance or help. Even if they may refuse to admit it themselves. This obstacle of men declining to seek help, has in many instances been the result of upbringing, social norms, and a false notion that men are somewhat invincible when it comes to issues relating to the fragilities of the mind. This façade upheld by the male gender, and this incorrect concept propagated by societal norms, needs to be dealt with, and more needs to be done swiftly as possible, as there have been many recorded cases of suicide and sadly there is no more help beyond that.

The statistics related to men suffering disproportionately are stark and alarming. In the UK, men aged between the ages of 40-49 have the highest suicide rates compared to other age groups amongst both genders. In a national survey, conducted by the Government, men reported lower levels of life satisfaction compared to their female counterparts. The striking contrasts do not end there. Men are three times more likely to commit suicide than women. This trend is not new and can be observed for a long time, “As long as we’ve been recording it, we’ve seen this disparity,” says psychologist Jill Harkavy-Friedman, vice-president of research for the American Foundation for Suicide Prevention, a health organisation that supports those affected by suicide.

Therefore, it comes as no surprise that a UK British Medical Journal study found general primary care consultation rates as 32% lower in men than women. (Consultation rates for depression, assessed by whether patients received antidepressant prescriptions, were 8% lower in men than women). In addition to this, nearly three-quarters of adults who go missing are men; 87% of rough sleepers are men; men are nearly three times as likely as women to become dependent on alcohol, and three times as likely to report frequent drug use; men are more likely to be compulsorily detained (or ‘sectioned’) for treatment than women; men are more likely to be victims of violent crime (1.5 more likely than women); men make up the vast majority of the prison population, and the rates of mental health problems are increasing, alongside, men self-harming themselves in prisons. The list seems somewhat endless, therefore, the need to help and encourage men has never been greater.

It is for these disconcerting reasons As-Suffa Community were compelled and committed to have initiated the National Homeless Awareness Week. The NHAW is a campaign led and powered by As-Suffa with the aim to highlight the need to promote assisting men with mental health issues from all walks of life. (You can find our website at www.nhaw.co.uk). This campaign endorses and encourages dialogue between expert leaders, and those who are suffering from mental health issues. The need to talk about difficult matters are too often overlooked, and it is time for real change. Those who are fortunate to have sought assistance, have gained a realisation that opening up, and talking about what is often considered taboo by many men, has led to a relief and a discovery that there is support and help on offer. Many other men, need to follow suit through such awareness and acceptance.

This National Homeless Awareness Week (NHAW) is a campaign which takes place every year, and has been set up to coincide with the World Homeless Day and World Mental Health Day (10th October). This year (2021), the NHAW will run between the dates of 4th and 10 October.

It’s wrong to suffer in silence. There are many out there who have suffered for too long. And in many cases, it’s been too late to get help. We want to bring as much awareness and attention to this problem that many men face every day in their lives. Whether it is putting someone who you know that is suffering to get in touch with us, or if it is through volunteering, or be it spreading the word through contacts and social media, your help is much needed and appreciated. Let’s help our men help themselves for a change.

2019 marked the inaugural NHAW, which saw a team of volunteers tour the UK to raise awareness around Homelessness by engaging the public, delivering workshops and calling upon central government to make a change to end homelessness.

Limited by COVID restrictions in 2020, we hosted a online panel discussion bringing together key members of organisations tackling homelessness.

are Children of the 250000 living in temporary accommodation

Spread the word of NHAW to all your social media contacts, using #ThinkAgain.

Subscribe to stay up to date with National Homeless Awareness Week